We can only understand Jesus’ teaching in the context of his gospel of the kingdom. Jesus taught that the long-expected messianic kingdom was actually breaking into history in a powerful way in his actions and disciples. And Jesus’ teaching explained how Jesus expected his followers to live in that new kingdom.

It is clear that Jesus intended his ethical teaching to be for everyone, not only some little group. At the end of his gospel, Matthew reports that Jesus sent his disciples into the whole world not only to baptize those who believe but to teach them “everything I have commanded you” (28:20).  —Ron Sider, (September 2021)

It was my great privilege to mentor under Ron Sider as a student and as an intern with Evangelicals For Social Action. Sider “walks the talk” in his personal life.
In this recent post on his own blog, Sider presents why followers of Jesus in the early Christian era did not participate in war. And why disciples of Jesus today should love enemies, even national enemies, rather than trying to destroy them.  Hard teaching, yes. But Jesus, yes.

The Sermon on the Mount in Matthew 5–7 is the largest block of Jesus’ teaching in all the four Gospels. So we must start there to look for an answer to the question: Does Jesus ever wants his disciples to kill their enemies?

Matthew 5:21-48 contains a set of sayings where Jesus says something like this: “You have heard that it was said, . . . but I say to you.” In at least some cases, Jesus seems to refer to an Old Testament teaching that he then sets aside.

It appears that Jesus claimed the authority to challenge widely understood demands of the law. And the early Christians clearly taught that central demands of the Old Testament law—circumcision, food laws, sacrifices in the temple for forgiveness of sins, the Sabbath—were no longer binding. Paul taught that although the law was a divinely given custodian applicable until the coming of Christ, now “we are no longer under a guardian” (Galatians 3:25).

The Old Testament not only forbids breaking one’s oath (see Leviticus 19:12); it also explicitly commands taking oaths. Deuteronomy 6:13 declares: “Fear the Lord your God, serve him only and take your oaths in his name.” See also Exodus 22:10-11.

Here in Matthew 5:33-37, Jesus clearly forbids what the Old Testament commands. And James 5:12 shows that the early church remembered and sought to live by Jesus’ prohibition of oaths: “Above all, my brothers and sisters, do not swear—not by heaven or by earth or by anything else. All you need to say is a simple ‘Yes’ or ‘No.’ Otherwise, you will be condemned.”

You have heard that it was said, “Eye for eye, and tooth for tooth.” But I tell you, do not resist an evil person. If anyone slaps you on the right check, turn to them the other cheek also. And if anyone wants to sue you and take your shirt, hand over your coat as well. If anyone forces you to go one mile, go with them two miles.

This eye-for-an-eye retaliation had been a central principle of Near Eastern law since the famous Code of Hammurabi (eighteenth century BC). And it was certainly the keynote of the Old Testament teaching on criminal justice. Exodus 21:23 is clear: “If there is serious injury, you are to take life for life, eye for eye, tooth for tooth.” Leviticus states the same standard: “Anyone who injures [a] neighbor is to be injured in the same manner: fracture for fracture, eye for eye, tooth for tooth” (24:19-20; also Deuteronomy 19:19-21). 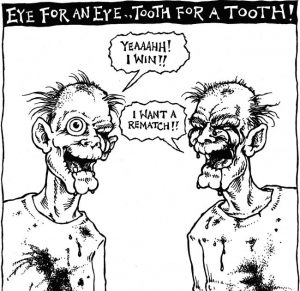 Jesus’ response to this fundamental Old Testament principle is pointed: “But I tell you, do not resist an evil person” (Matthew 5:39). To try to argue, as some do, that here Jesus is not setting aside an Old Testament teaching seems to ignore the clear meaning of the text.

Central to an understanding of this passage is the proper translation of the key verb antistēnai. The NIV translates it “do not resist.” And a number of people have concluded that Jesus advocates pure passivity, total nonresistance in the face of evil.

A careful study of the verb used in this text, however, shows clearly that Jesus is not recommending passivity. The Greek term for “resist” used in Matthew 5:39 appears in the Greek Old Testament primarily as a military term. N. T. Wright summarizes the meaning of the term this way: “The word ‘resist’ is antistēnai, almost a technical term for revolutionary resistance of a specifically military variety.”

After prohibiting a violent response to evil, the text describes a proper response in four concrete situations. In each case, the commanded response is neither violent nor passive. Jesus calls his disciples not to turn aside passively or hit back, but rather to confront the evil nonviolently.

The second mile. “If anyone forces you to go one mile, go with them two miles” (Matthew 5:41). The context for this saying clearly is Roman imperialism. The word translated “mile” is a Roman word, not a Jewish word. And the word translated “forces you” is the technical term (verb, angareuō; noun, angareia), widely known in Roman law to refer to the legal right of Roman soldiers to compel subject people to carry their packs for one mile. The violent Jewish revolutionaries certainly urged fellow Jews to refuse to carry the baggage of oppressive Roman soldiers. Jesus recommends the precise opposite!

But is he recommending passivity? The soldier knows the colonized person has a legal obligation to carry his pack one mile. But he also knows the law forbids the Roman soldier to force the person to carry it more than one mile. And he knows his commander may punish him severely for breaking this law. So when they reach the end of the first mile, the soldier asks for the return of his pack. But the person offers to carry it another mile. Now the soldier is in trouble. He may be disciplined by his superior. So he begs to be given back his pack. “Imagine the situation of a Roman infantryman pleading with a Jew to give back his pack!” writes biblical scholar Walter Wink. “The humor of this scene may have escaped us, but it would scarcely have been lost on Jesus’ hearers, who must have been regaled at the prospect of thus discomfiting their oppressors.” With this action, the oppressed Jew seizes the initiative and asserts his dignity—but all in a nonviolent way, fully compatible with loving the oppressor without endorsing the oppression.

It is hard to exaggerate either the originality or the importance of Jesus’ direct command to love our enemies.

You have heard that it was said, “Love your neighbor and hate your enemy.” But I tell you, love your enemies and pray for those who persecute you.

New Testament scholar Richard Hays points out that the term echthroi (“enemies”) is generic. It “is often used in biblical Greek of national or military enemies.” For example, in Deuteronomy 20:1, the text says: “When you go to war against your enemies [echthroi] and see horses and chariots and an army greater than yours, do not be afraid of them.” This verse follows immediately after Deuteronomy 19:21, which commands an eye for an eye—the principle that Jesus specifically rejects. After a major review of recent scholarly literature on the topic, the German scholar Heinz-Wolfgang Kuhn concludes that the enemies Jesus calls his disciples to love include everyone. “The directive is without boundaries. The religious, the political, and the personal are all meant. Every enemy is meant.”

Martin Hengel, one of the leading scholars on the nationalist, revolutionary Jewish movements of Jesus’ time, thinks that Jesus’ command to love one’s enemies “was formulated with direct reference to the theocratic and nationalistic liberation movement in which hatred toward an enemy was regarded as a good work.” There is no way to prove that decisively. But in the immediately preceding section, Jesus has urged his followers to carry the packs of Roman soldiers not just the legally mandated one mile but also a second mile. Thus Jesus is thinking about the situation that the violent Jewish revolutionaries hated. If in verse 41 Jesus is talking about how to respond to Roman imperialists, it is very likely that his command to love enemies includes the people whom the revolutionaries sought to kill.

Jesus’ stated reason for loving one’s enemies is important. His disciples should act that way so “that you may be children of your Father in heaven” (v. 45). 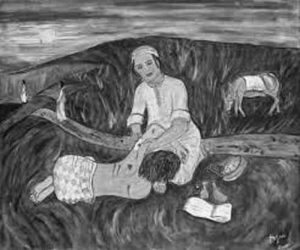 Jesus’ command to love our enemies contradicts the practice of every society known to historians. No precise parallel to Jesus’ words has been found. There is no other ethical issue about which the New Testament says Jesus’ disciples are like the heavenly Father when they act a certain way.

Also striking is the fact that Matthew 5:38-48 is probably the most frequently cited biblical text when one collects all the statements about killing from the early Christian writers before the time of Constantine. Ten different writers in at least twenty-eight different places cite or refer to this passage and note that Christians love their enemies and turn the other cheek. In nine instances, they link this passage from Jesus with a statement that Christians are peaceable, ignorant of war, or opposed to attacking others. Sometimes they explicitly link Jesus’ saying to a rejection of killing and war. In every single instance in which pre-Constantinian Christian writers mention the topic of killing, they say that Christians do not do that whether in abortion, capital punishment, or war. And Jesus’ statement about loving enemies is one of the reasons cited.

Jesus called his followers to love their enemies, not kill them. One may conclude, with people like Reinhold Niebuhr, that that is what Jesus taught, but it does not work in the real world. Therefore we must ignore what Jesus taught. But that approach is simply not available to anyone with an orthodox understanding of who Jesus is.

If Jesus is God incarnate; if Jesus truly was the expected Messiah, the Christ; if Jesus told his followers to love, not kill their enemies; if Jesus’ messianic kingdom has begun in his life, death and resurrection; and if the crucified and risen Jesus is now Lord of all earthly kingdoms, then Christians today must refuse to kill their enemies.

For a much longer treatment of this topic, see my book SPEAK YOUR PEACE; WHAT THE BIBLE SAYS ABOUT LOVING OUR ENEMIES (Herald Press, used with permission).